Have you ever questioned yourself: where is the most expensive place to live in? Where does 1 USD buy you fewer things…? If you did but never actually tried to search or read about it before you will be surprised by the answer.

So, what do you think is the most expensive city in the world? For sure, New York or London…? Nop, think again…  Maybe one of those packed Asian cities like Tokyo, Singapore or Hong Kong? No… one other try? Ok, for sure a city in ultra expensive/rich European countries like Zürich or Oslo? Nop & nop again. Feel free to continue trying, but if you haven’t read about this before, you won’t guess it 🙂

The most expensive city in the world is Luanda, Angola! According to IMF Angola is just the 118th richest country in the world and had ranked (149th) even lower in the Human Development Index. On the other hand, despite not existing full statistics, studies show that Angola has one of the highest Gini Index. The higher the Gini Index, the more unequal is the income distribution in a country or region. So, who says It’s the most expensive city? Mercer is saying it for a few years now! 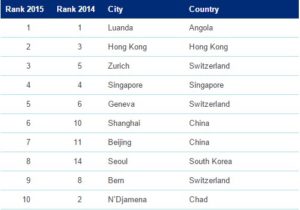 So, WHY and HOW did this happened…?

There are two main reasons why prices in Luanda became so high, so fast. Angola was at War for +40 years. Initially, it was an independence war against Portugal (roughly 15 years) and then the civil war for more +25 Years. A country that is at war for so long gets all of its infrastructure destroyed and needs to be completely reconstructed. At the same time by the time of independence almost all the Portuguese and most of the richer Angolan fled, leaving Angola with very little skilled human capital.

The other main reason is the usual suspect for money related problems, OIL. Oil can be the best and the worst thing that can happen to a country, and Angola has a lot of oil… I mean a lot! Despite this oil crisis, Angola has just surpassed Nigeria as the biggest African oil producer in June. The Oil&Gas Industry spends and generates more money than any other. It also needs a huge amount of human capital with extremely specific skills. You can imagine that every other sector won’t be able to follow and the whole economy may suffer the consequences.

If we link the WAR consequences with the abrupt necessity of human capital & infrastructure you understand that an explosive mix happened for few years in Angola. The oil industry had all the money to spend and there was virtually no capacity to supply its needs. So, when an oil company needed housing for their people they would just pay whatever was asked because there were so little housing offers. When they needed food, they had to import it because there was no internal production. When they needed skilled people they had to hire expats or Angolan from abroad because the ones that stayed had none education and skills./p>

In Angola, almost everything is imported… Even Gas & Fuel are imported in the biggest oil producer in Africa! Of course, this makes the cost of living in Luanda increase… a lot! Let’s see some of the ordinary products with extraordinary prices.

When buying grocery in Luanda you notice that every fresh or refrigerated product will cost between 2 and 3 times the price in most of the other countries. So, here are some examples:

House and Household costs in Luanda

Rent is the trickiest one… also the most obviously expensive. A one-room apartment in an old building in Luanda can cost between 2000 and 3000 USD. And when say old, I really mean old (not antique), in very bad shape due to a complete lack of maintenance… In a newer building, the prices can go from 5 000 to 10 000 USD easily, without much luxury… If you want luxury It would be even worse! Bear in mind that in Luanda, neither water or electricity are certain, so these houses usually include generators, water tanks, water pumps and so on…

The cheapest internet (512 kbps) costs 60 USD but can go up to roughly 650USD (yes 650 USD, it’s not a typo) for the 10Mb… cable TV is between 20 USD(really basic, without sports and TV series channels) and 100 USD (with almost everything you can expect) depending on the number of channels. On the other hand, electricity and gas are quite inexpensive. With 20 USD we can get electricity for roughly 3 to 4 months and a gas cylinder (just the gas) costs 5 USD.

Going out / Restaurants in Luanda

Fast Food – KFC is the only big international fast food chain in Angola, the cheapest KFC combo costs roughly 15 USD and a sundae 3 USD. Probably the most expensive fast food you will eat, but compared to other prices some people would call it cheap 🙂

Restaurants – The main meal in a nice restaurant will cost something between 30 and 50 USD. If it’s really upscale it can be more, some cheaper options can be less. Anyway, if you add drinks, starters and dessert you can easily reach 100 USD per person for a meal. If on top of this you ask for some good wines or other alcoholic drinks, then 150, 200 USD could be reached faster than you can imagine 🙂 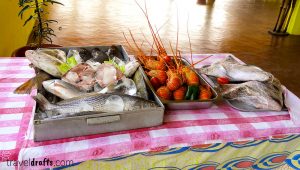 Some Other Prices in Luanda

Even gas, which usually is very inexpensive in oil producer countries, is costing now roughly one USD per liter!

International flights to/from Luanda are very expensive, usually near 1000 USD from Portugal, and from 300 to 500 USD from Namibia & South Africa, for example.

Tobacco used to be quite cheap, but this will change soon as the government has just increased hugely its taxes.

Finally, my favorite price in Angola: you can pay more than 200 USD for a bank international transfer! This could mean 5% of your payment!! And I’m not even going to talk about the quality of this (and others) banking service… 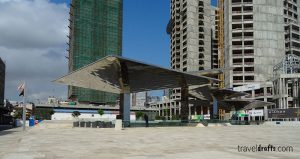 Have you been in the most expensive city in the world? or any other of the top 10? What’s your favorite price? Share your insights with us!