The thing no one tells you about tubing in Vang Vieng, Laos

For those of you who don’t know, tubing is quite simply floating in the river with a big truck tube as a buoy. Tubing in Vang Vieng became very famous or even infamous a few years ago because it was connected to drinking, drugs which lead to a few deaths.

There are many blog posts about this! About the drugs, the drinking, the deaths… how wild it was, and how Laos stopped it by closing down most of the Bars. This is not the fundamental thing about tubing in Vang Vieng. This was all accessory! Nowadays, as far as we saw, there are no drugs being sold and it’s a pretty vanilla outdoors activity. But that’s old and not the essential thing about tubing in Vang Vieng also.

Tubing in Vang Vieng is a relaxing a soothing activity! It isn’t an adrenaline thing. Tubing is about going through the river for 3 or 4 hours and maybe stopping at a river bar for a drink. But this is what every blogger tells you (and it’s true!)… 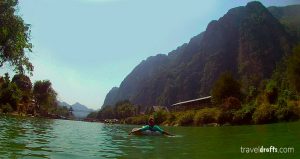 As long as you aren’t wasted it isn’t dangerous at all… just be aware that in some parts the river is quite shallow. Although, this is pretty obvious, isn’t it? We wouldn’t be writing a post about it, would we?

While tubing we strongly advise you to do two things: 1) be nice and salute the kayakers by saying: “Sabadie” (Hello in Lao); 2) be mean and through water at them! These are part of the fun but aren’t the fundamental thing you need to know about tubing in Vang Vieng. The weird thing we noticed was: barely anyone was tubing while we were there! We saw much more people kayaking than tubing… we are not sure why everyone talks about tubing in Vang Vieng and then no one is doing it…? It was weird, but definitely not the thing you need to know.

Finally, the one true thing you need to know about tubing in Vang Vieng and no one else is telling you… not even travel agents, the service providers, other bloggers, or travel books… is: When you reach the starting point,

You have to tube DOWNSTREAM the river! Not UP the river, or across the river… you have to float down with the current! NOT against, OK? Now you know! Don’t go there and start paddling upstream like an idiot.

Price: 55 000 Kip per person + 60 000 returnable deposit to guarantee the tube. If you return past 18h you won’t receive the deposit back.
Time required: at least 2h30 hours. But it depends greatly on how much time to take in the bars;
Getting there: Vang Vieng is very small, just look for the 2 or 3 stores that have huge tubes on the outside. After you pay they will take you to the starting point.

PS: Sorry… 🙂 I hope you enjoyed reading the post as much as we did writing it! See it as a blogger/writer self-criticism… Sometimes we write things so obvious and have been repeated dozens of times as if we had found the holy grail.

8 thoughts on “The thing no one tells you about tubing in Vang Vieng, Laos”

Booking.com
Scroll back to top