Where to go in Portugal?

Portugal is one of the best countries to visit!! OK, it’s our homeland, maybe we are slightly biased, but there are so many fantastic spots to visit. If you are planning on going on a trip through Europe you should definitely include Portugal. Or just visit Portugal🙂

4. Cheap and safe country to visit;

7. Small country, excellent for road trips –  in 7 days you should be able to cross-continental Portugal.

Portugal is a country with a rectangular form, 560 km long and 220 km wide. It’s easy to cross from north to south and east to west. We belong to the Iberian Peninsula along with Spain (but It isn’t part of Spain as some people wrongly believe!!). Madeira archipelago and the Azores Islands are also part of Portugal, and we have a vast coastline in the Atlantic Ocean. The two main cities in Portugal are Lisbon, the Capital and Oporto (our hometown).

When to go to Portugal?

Portugal has a Mediterranean climate and best season to go to Portugal is during Summer (May to September). You can enjoy the beach season and the sunny days, being outdoors and having long days. Seawater temperature is cold except Algarve.

The best way to go around Portugal is by car, bus or train. Portugal has a great coastline so it is wonderful to do a road trip through the cost and go stop by the sea whenever you want.

Some of our favorite places to visit in Portugal

If you like natural parks and outdoor activities Geres is the best Portugal has to offer. It is located in the North, near Braga, 100 km from Oporto. This is a fantastic place to go trekking, swimming in lagoons and waterfalls, canyoning, BTT, horse rides, camping… You can visit the small traditional villages (Lindoso, Soajo), the submerged village “Villarinho das Furnas”, the Roman ruins. For information on the best hiking trails in Geres visit this site. 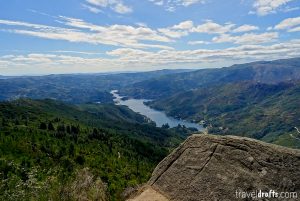 You must visit Porto, it should be on your bucket list. Porto is our favorite city! It must have something to do with we being from there, but we are not sure:). Try to go in Summer during the festivities of S. João. You must visit: Ribeira does Porto, Foz, center of the city (Aliados, Clerigos), street of Santa Catarina to window shopping, Casa da Musica, Serralves park and the city park. 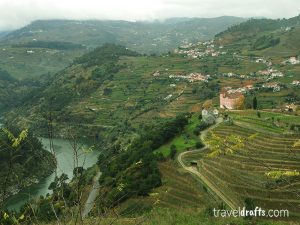 The Douro Valley is listed as a heritage site and is one of the most beautiful places in Portugal and where the Port Wine is produced. You should start your journey in Vila Nova de Gaia where the river Douro (popular meaning Golden river) flows into the sea. You can visit the caves where Port wine is aged and have the opportunity to taste the wine. In the banks of Douro, you will find the old Rebelo boats, the vessels that carried the wine from the farms where it’s produced to the caves in Gaia. The wine is produced on the river’s hillsides, so head along the river by car, train or boat cruises (we recommend the boat) until you reach Miranda do Douro the point when you reach Spain. Along the way, you can admire breathtaking landscapes over the river and visit the vineyards, towns and villages. The best time to do this tour is in September when the grape harvest begins and the wine is produced. 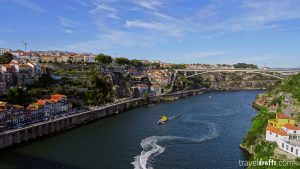 Coimbra is a student city, site of one of the country’s greatest university for the past five centuries. Coimbra has the oldest University in Europe. It’s classified as World Heritage and its library is one of the most beautiful baroque libraries of Portugal and Europe (bookworms will love it 🙂 ). The best time to visit Coimbra is during the academic parties “Queima das fitas” in May, during which there is a good environment with live music every night. Check out the historic center, the botanic gardens and visit the “Quinta of Lagrimas” where was born one of the most beautiful love stories of Portugal between D. Pedro and Inês de Castro.

Nazare is a small city with a wonderful view and beach, the best place to dive in the sea, surf or just eat good fish. You must go to Pederneira and Sítio above the beach and enjoy the view, catch the elevator to go to Sítio from the beach. Claudia used to work in the Hospital in Sitio by the church, which must be one of the best sights you can get on your work. This was the place where surfer Garrett McNamara, surfed the world record-breaking giant wave: 78 feet (23.8 m) in 2011.

Peniche initially was an island, but with the wind and the tides it became a peninsula. Peniche is a surfing mecca spot in Europe, many world known beaches like Supertubos, Almagreira, Belgas, Consulação, Lagide, Molhe Leste, Porto Batel, Praia Norte. According to Lonely Planet, Peniche beach was chosen as the second best beach in 2015 in Europe. The Berlengas is an archipelago situated 10 km from Peniche and is constituted by 3 islands and it’s absolutely breathtaking, as you can see below.

Sintra has one of the most astonishing fairy tales palaces that we have visited: “Palácio Nacional da Pena” and it’s gardens. The palace was home to kings and Queens of Portugal until the implementation of the Republic in 1910. Spend the day exploring the gardens and the Palace. If you want to know more about fees and timetables for the park.

Lisbon Is the capital of Portugal, the most touristic city and the one with more things to do and see. Sometimes called the city of the 7 hills, Lisbon has a mixture of tradition and modern aspects. The best thing to do when visiting is to walk around the city and ride the tram. You definitively must:

The natural park of Serra da Arrabida is where you can find some of the most fantastic beaches in Setúbal – Portugal. You can reach the beaches by car, bus, or just on foot. The most popular beach is the Figueirinha, because of the parking spots, we prefer the slightly more reserved Galapos and Galapinhos. There are also trekking spots and it’s a frequent place for climbing.

Pessegueiro Island e Porto Covo in Alentejo: It’s a small island located in the coast of Alentejo, 250m from coastline Porto Covo. The island isn’t populated and has a Roman port. You can take a boat tour to the island, or just simply enjoy the view from the beach of Porto Covo. Porto Covo’s beach is one of the most beautiful beaches in the world.

In Alqueva there is a huge dam built on the Guadiana river, creating the largest artificial lake in Europe. Take a walk or BTT tour around the lake, and enjoy the view of the olive trees and cork oaks (Alentejo is the main producer of cork and as said above Portugal produces over half of the world’s cork). You can do some aquatic activities in the lake, like fishing,  canoeing, windsurf and so on… Monsaraz is a picturesque village on the high ground with a castle with a view to the Dam of Alqueva. If you are a sweet tooth you are going to love Alentejo’s cakes and desserts. You should try Fidalgo made of egg yolk (very very sweet), almond cake, Sericaia, pão de rala (normally the principal ingredient are cinnamon, eggs, and almond). Alentejo is the second region that produces most olive oil in Portugal (the first is Trás-os-Montes), so buy some quality olive oil:)

Beaches in Algarve are well-known for its cliffs and the warm seawater because of the Mediterranean tides.  Algarve is a top touristic place especially for the English who spend summer vacations there. It can be a bit crowded in August (the peak season). Some of the best beaches you should visit Rocha beach, Quarteira beach, Farol beach, Vilamoura beach, Monte Gordo beach, and Benagil cave. Algarve has a big Arab influence, observed in its architecture, and some words, the word Algarve in Arab  (Algharb) means west.

Lagos is a traditional city, not changed too much by the tourism industry. Walk along the streets and check out the traditional houses; go to the food market, buy fresh fruit and veggies, try the oranges!! (they were considered the best in the world!).  Dazzle with the view in Ponta da Piedade of the cape of São Vicente.

Rio Formosa National Park is a protected area because of its natural habitat of a variety of animals principally birds and home to Portuguese water dog. Visit the park by boat or bike, It’s totally worth it!

8 thoughts on “Where to go in Portugal?”