Andalusia is the southernmost community of continental Spain. It’s the second largest in the area and the most populated one. Many cultural phenomena for which Spain is famous for have its origin in Andalusia, like the flamenco, bullfighting or the Gazpacho. Andalusia’s interior is the hottest part of Europe and the coast is world famous for its beaches and sunny weather.

Historically and culturally Andalusia is marked by the 700 years of Moorish presence. In this road trip through Andalusia, we tried to get a little of everything that Andalusia has to offer: history, cultural identity, food, beaches, and even adventure. However, before starting to travel you should think about what to pack for a road trip.

Visiting Spain? Check the 50 things you need to know before traveling to Spain!

We purposely skipped Seville, not because it’s not worth it, but because it should be visited on its own. Have a look at what’s the best things to do in Seville here.

Our road trip through Andalusia itinerary

We have been trying the new map feature on Travellerspoint and it’s really useful. Have a look yourself, and Create your own travel maps.

This road trip through Andalusia starts in Cordoba, the best example of Moorish influence in Spain! In the 10th century, Cordoba was the biggest city in the world! In Cordoba, you can’t miss its Cathedral/Mosque. Is it a cathedral? or a Mosque? Check it and decide for yourself.

We also strongly recommend you to lose yourself walking through the Juderia. It’s full of stores. bars and restaurants. Cordoba is extremely hot and at night the city is still lively and much more pleasant. The Roman bridge & Alcazar are also great attractions you should visit.

During your stay in Cordoba, we recommend you to stay at Exe Ciud, ad de Cordoba. It is cheap, has parking, and you can walk from there to the historic center, so it is perfect for a road trip. In Granada, you can’t miss the Alhambra complex. Within Alhambra, you will find the Generalife gardens, the Nasrid Palaces, and the Alcazaba. It’s a World Heritage Site and was the finalist to the new 7 wonders of the world. Reserve a full day for it and check here for full information.

Alhambra aside, you should visit Albayzin which is an old Arab quarter. The streets are very narrow and small, with typical houses with a strong influence of the Moorish. Others attractions are the Mirador of San Nicolas, the city center and the Cathedral. Have a look at this list of amazing things to in Granada for more travel inspiration.

Granada is a pain to drive and park. Getting to the hotel and finding a place to park was probably the most difficult thing we did in this road trip 🙂 So chose the hotel wisely, it’s probably better not to stay right in the center of the city. After 2 great city escapes your next destination on this road trip through Andalusia is the Sierra Nevada, which is just a few Km from Granada. After some investigation, we discovered a trail called Los Cahorros and looked like the perfect way of relaxing in the mountains. Los Cahorros is a circular trail, 8km long, with beautiful views, a cascading river that creates rock pools for swimming, narrow caves and tunnels that you have to crawl through or hang off the rock face. Walking along the gorge and, of course, the famous hanging bridges will make your day memorable and fun! Today you finally get to the coast, and before arriving at Malaga you can enjoy the beach (inatmuñacar or Nerja). In Malaga don’t miss the famous La Malagueta beach. Near La Malagueta you have the city port and particularly the new quay one, which is full of restaurants, bars, and shops. It’s a very lively place and a very pleasant walk. One thing you should be aware of is that it’s practically impossible to park for free in Malaga, particularly in the center. We opt to park in one of the city parks and leave the car altogether. It isn’t cheap, but it’s probably the best option. On the other side, if you find a hotel close to the center, you can walk around easily.

In Malaga, you can’t miss the Alcazaba and the Gibralfaro Castle. From the Castle, you have amazing views on the town, the port, and the beaches around. Malaga’s Alcazaba is in our opinion even more beautiful than the one in Granada, and that says a lot .:) If you are into city markets (we love them), visit the Atarazanas Markets! It’s in the center and full of yummy things.

Check here more things to do in Malaga and surroundings. In the 5th day of this road trip through Andalusia, you can pamper yourself in Marbella! The great appeal of Marbella is on its beaches, hot summers, luxurious marina, and parties. Enjoy a morning in the sun and sea in one of the many beaches around Marbella.

In the afternoon, go to Puerto Banus just a few km west to Marbella. This is where luxury and wealthy people are. It’s great for people (wealthy, really wealthy people watching). Around the Marina, there are boutique stores, bars, restaurants, and hotels. You will probably be tempted to take pictures of the sports cars and luxurious yachts parading there.

The last day of our road trip through Andalusia starts in Ronda. This Andalusian town became famous for its bridge and unique setting. The city is built on the edge of a beige stone cliff making it a beautiful lookout to the fields above. Ronda’s bridge was built and rebuilt several times. It is very famous and considered an architectural marvel and appears constantly in blogs, magazines, etc. Ronda is surely worth a visit on any trip to Andalusia! 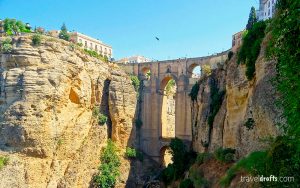 As the road trip is ending we leave Ronda and go to our grand finale: Caminito del Rey. After an intense week, you will finish with an adventure in the infamous “most dangerous trail in the world”… Well, not anymore. Now it’s perfectly safe, unbelievably beautiful, and probably the highlight of your trip! The uncanny beautiful narrow gorge, the possibility to walk through it at 100 meters high, and feeling the wind blow in your face will continue in your mind for a long time. At least stayed in ours… 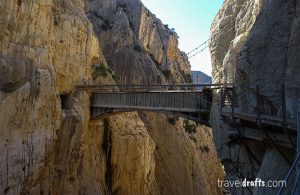 If you have time, you can make 2 days in Ronda and Caminito del Rey. You are also 2 hours away from the Andalusian capital, so you can head there and spend 48 h discovering Seville.

We truly believe that a road trip is the best way of getting to know Andalusia. It’s a region with so many things to see, eat and do. With a car, you can travel between places much faster and will be able to reach places you couldn’t without it. If you are looking for a more off the beaten track road trip, probably the white villages of Malaga are a great option!

Have you been to Andalusia? What’s your favorite Andalusian attraction?

Booking.com
Scroll back to top
×