How to do an amazing day trip to Bratislava

Bratislava is right next to Vienna and quite close to Budapest. During one of our trips to Budapest, we decided to make a day trip to Bratislava, Slovakia. The first question was:

What is the best option: Train or Bus? 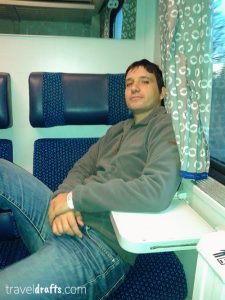 If money is all you care, you can save 1.5 Euros on this return trip, but the train is definitely a better value for money deal. You have more options, more flexibility, if you are under 26 you can get a reduced price and most important you can go earlier and arrive in the morning to Bratislava. The fact that we were staying very close to the train station was also very nice because we were able to just walk there. To take full advantage of the day we woke up really early to catch the first train to Bratislava

The train was almost empty, we had a cabin just for us. The cabin had heating (remember it was winter) which made the train journey was very pleasant. We were able to take our breakfast, relax and even sleep a little bit. After the 2h40 we arrived to “Hlavná stanica” (the local name of the station) and left the train. The station isn’t exactly in the city center and the surroundings aren’t attractive at all. From the train Station to the old town you can take any bus or trolleybus directing to “Račianske mýto” and then take a tram to the city center; or you can just walk down towards the Danube, following the sign saying “Centrum” which of course was our option 🙂 We always walk around to know a city and on our way down we got to see the Presidential Palace in Hodža’s Square. Outside the palace is a memorial courtyard that is separated from the square by an impressive fence that features two gold-plated wrought-iron gates. 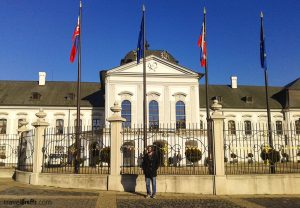 Arriving at the old town the views change completely into narrow pedestrian streets and squares, full of souvenirs shops, old classical buildings, and statues. The whole town is full of statues, it’s very cool wander around the city and finding pieces of art spread in it, some of them with a clear meaning and reminding us of the not so remote past. Despite maximizing our time in the city, we only had one day so we choose 4 major sights/activities.

Best things to do in a day trip to Bratislava

We had read the church was rather unique, with the blue color and got curious. This was a clear failure on our part, yes it’s quite strange to have a blue church, but it’s just that. The church is small, struggled in the middle of a busy square and with nothing particularly appealing on it. Go there just if you have nothing left to do. 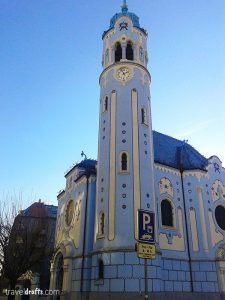 It’s a huge and imposing “castle”, but It looks much more like a Palace than a Castle. We are used to Western Europe’s, middle age, stone castles, built for defense purposes. Anyway, it is on the top of a Hill, has complete defense walls around and four huge towers. Unfortunately, it was closed and we couldn’t visit the inside, but from the outside gardens and Walls, you get fantastic views of Bratislava and the Danube. 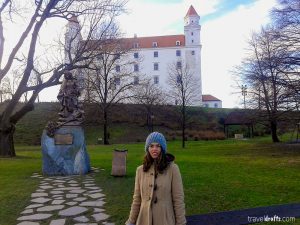 It’s the biggest and most important church in Bratislava (69.37 meters long, 22.85 meters wide and 16.02 meters high), built in Gothic style. There’s a replica of St. Steven’s crown and it was historically used as the coronation church for the Hungarian kings. 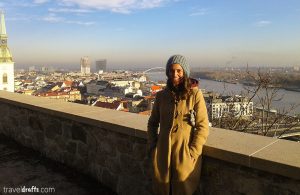 this was definitely our favorite activity and mostly because of the above-referred streets, squares and statues. The statues make the city center much more appealing as you never know what surprise you will see next. The most famous and unique is the Cumil (The watcher), there are two explanations for the status: the first says he represents the typical communist-era worker who doesn’t work, the second is just looking up women’s skirt. We say: why not both :). But check also the Paparazzi, the Schone Naci, the Napoleon soldier, Hans Christian Andersen and so on… 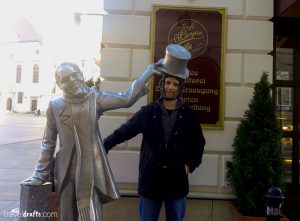 Food and Drink in Bratislava

Our second fail in Bratislava happened when went lunching. When traveling we like to eat street and markets food, fast food, and sometimes traditional food in restaurants. This time we went to:

Roland Restaurant Café – It’s completely central, clearly a tourist spot, but we wanted something different, and we hear that Bratislava is really inexpensive to eat. Well.. not this restaurant. It was the most expensive meal of the trip and… it was only average. We had schnitzel and some dumplings. But for 65 euros in Bratislava, I expect much, much more. It’s roughly what we pay in Luanda, but Luanda is the most expensive city in the world. We definitely don’t recommend it, not because it’s bad, it just isn’t worth the price. 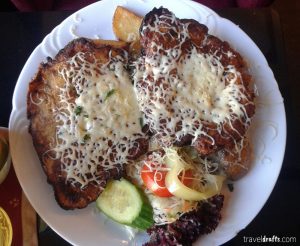 Bon Bon Cokoladovna –  We had some good hot chocolate before, but this was probably one of the best hot chocolate ever. It was so creamy, soft, sweet. Absolutely fantastic. It came with whipped cream and water on the side. Besides the hot chocolate, it has some good cakes (chocolate or not) and very good-looking bonbons.

By the end of the afternoon, we walked back to the train station and return to Budapest. The train was now much fuller and we couldn’t find a cabin just for us. Anyway, it was still very comfortable, we like these long haul, eastern European trains. We are looking forward to our trans-Siberian train adventure.

Looking for more info about Bratislava? Check this 24 hours in Bratislava Guide

All in all, it was a very pleasant one-day side trip from Budapest, but we feel like Bratislava is the kind of city that you only need one day to visit. It just doesn’t have enough big attractions.

For more information on both on how to get to Bratislava and its attractions, check this fantastic site.