During my student years (2005) I participated in the student program ERASMUS and did one of my Internships in Brussels, Belgium. So I decided to give you an insight into living for 3 months in Belgium, the land of overindulging with chocolate and goffres. The ERASMUS (European Region Action Scheme for the Mobility of University Students) program is a student exchange program in the European Union.

Why Belgium???? First of all, It’s in the middle of Europe so I hoped to travel in Belgium and to the surrounding countries. Also, I had great references for their internships in the area of physiotherapy. Later I found out that some of the famous things about Belgium are good reasons to visit it, chocolate, goffres, bicycles, and Bruges. 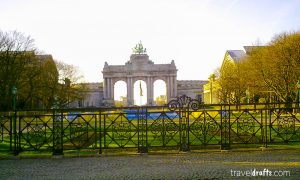 It was a stimulating experience, first of all, living in a foreign country and not speaking very well the language, second, it was the first time I was living alone. So it was exciting and frightening at the same time. In terms of the internship itself, I didn’t learn new techniques or skills but was surprised by the organization of the hospital and the fact that physiotherapists were specific to a certain area. At that time in Portugal physiotherapists were generalist, the same physiotherapist treated neurological patients and an orthopedic patient. Nowadays it doesn’t work like that anymore, at least in the hospitals or big clinics.

Belgium has two official languages French and Dutch, and in a small part also German. There are two distinct regions: the north is mostly a Dutch speaking, Flanders, and the south french speaking, Wallonia. Brussels is bilingual, so a lot of people speak both languages, and for example, street signs are in both languages. Belgium had a turbulent history and was dominated by many other countries like France, Spain (yes Spain, which is quite odd), Germans, Netherlands. It gained its independence in 1830 but was the battlefield of Europe during world war I and II. 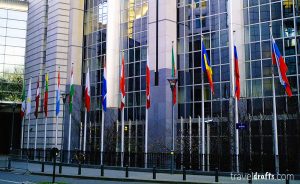 Best and Worst things about doing Erasmus in Belgium

But in the end, I took pride in the experience and who I managed to live along in a different country with different language… 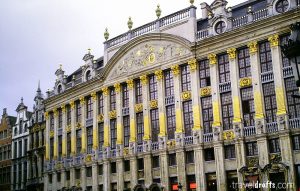 Where to go in Belgium

The capital of Belgium and the European Union has plenty to keep you entertained. One of the things to do in Brussels is visiting the headquarters of the European Union. The main attractions are situated in the city center, the Grand Place where is located in the town hall and the king’s house. Nearby is the statue of Everard’s Serclaes, who was a local hero. It is said if you rub the statue it gives good luck. 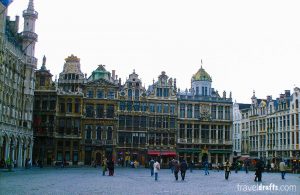 One of the other best things to do in Brussels is visiting the Manneken-Pis statue. The statue itself isn’t that great, but is the symbol of the city! At first, it was a fountain that played an essential role in the former distribution of drinking water. The legend says the statue is a representation of a boy who was spying the soldiers that were attacking the city, and he urinated on the burning fuse that they were planing in detonating and thus saved the city. The statue is often dressed in costumes. 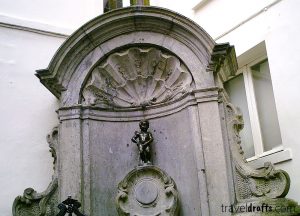 The Atomium was constructed for the world fair in 1958, nowadays it serves as a place to do exhibitions. It is quite impressive, 102 m high and each sphere have 18 m in diameter, inside it is very futuristic, it seems like you are inside a space station. 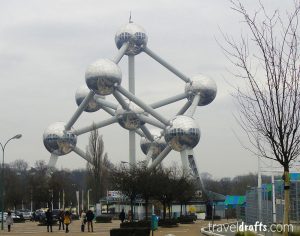 Bruges is located in the north of Belgium, seems to be taken from a fairy tale. All the buildings are of medieval architecture, with similar size, and in harmony. The river and the canals between the houses give it a romantic look. It’s a place to take wonderful pictures. Bruges is well known for its lace, so don’t forget to window shop seeing, they are breath-taking. One of Bruges’ main attractions is the church of Our Lady that has one of the highest brick towers in the world (122 m). Inside the church, you can find sculpture: Madonna and Child, by Michelangelo.

I highly recommend you to see the movie In Bruges. It’s a fantastic movie and one of the things that make it great is the scenery and cinematography of Bruges. 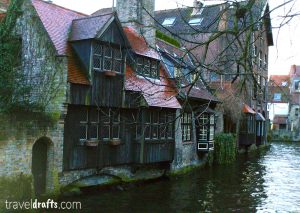 Ghent has a fantastic castle with a bridge. It was a nice day trip and definitely worth it for anyone going to Belgium… If you are planning on a longer trip, we recommend you to read this complete guide to Ghent. 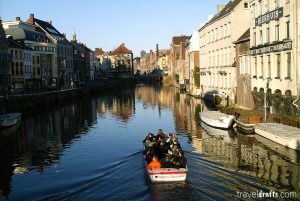 Still wondering if you should visit Ghent or Bruges? Our friends from “our escape clause” have the answer…

Antwerp is one of Belgium’s most important cities. In this Flanders city, most people speak Dutch. You can find the diamond quarter, the workshops that polish diamond, diamond brokers and merchants. You can visit the diamond museum. Nearby exists the Jewish quarter, Antwerp became a major center for Orthodox Jews, usually associated with the diamond industry. Antwerp also holds one of the most important universities in Europe. 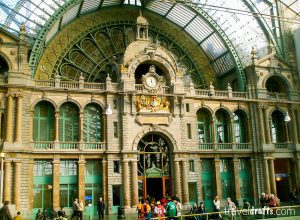 What to eat in Belgium

Chocolate, chocolate and more chocolate… when you get tired of chocolate you have gofres (waffles) and then Belgium fries…

Being under the domain of Spain (who brought chocolate to Europe) and later on having the Congo as a colony influenced the culture of chocolate and helped the creation of the perfect praline. Some of the best-known chocolate makers come from Belgium: Côte d’Or, Godiva, Guylian, Neuhaus, and my favorite Leonidas, but whatever your tastes are you will find it. There are different chocolateries throughout Belgium but most of them are situated by the city center, around the Grand Place. You can just enter the different chocolateries and ask to try the different praline or truffles. In Bruges, there is a chocolate museum. 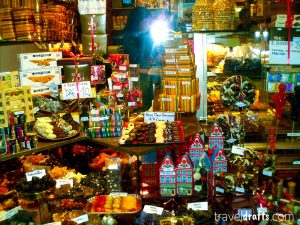 Goffres: There are two kinds of goffres (Waffles): the Liege goffres and the Brussels goffres, we liked more the Liege goffres! You can find them in the train stations, in the streets, in the gardens or parks, everywhere! The smell is the most lovely thing, they are served still hot with chocolate, cream, white chocolate, fruit, you name it. You can spend the day eating them!

Frites (fries), never call them french fries, they are Belgium’s national dish! “les frites’ were wrongly given the name ‘French Fries’ by American servicemen when they arrived in Belgium at the end of the First World War. They are the best street food! The Belgian don’t consider them a side dish but the dish per se. They are made with a specific potato, at least 10 mm thick, fluffy on the inside, crispy on the outside, and they are fried twice. In many spots, they are sold along the road in cones and come with different sauces  (mayo, ketchup, mustard or other more exotic like tartar sauce or aioli).

Mussels are a very typical Belgium dish, I never tried but heard that they are delicious. In the city center of Brussels, you will find several spots to eat mussels.

Kebabs, during my stay in Belgium I had the opportunity to eat Kebabs, lots of kebabs! they were cheap, and like any other student, I didn’t have much cash. As I referred Brussels had plenty of different ethnicities, including Turks meaning delicious Kebabs:)

In a hindsight, Belgium is a paradise for foodies, particularly Brussels. However, like any other place if you really want to enjoy real Belgian food in Brussels you need to know the best locations.

Have you been to Belgium? What did you think of it?

3 thoughts on “ERASMUS in Belgium”