Top things to do in the Joburg area

During our last trip to South Africa, we spent a few days in the Joburg and Pretoria area, both before and after our adventure in the Kruger National Park.
Despite being mainly a business city, Joburg and its surroundings have some nice attractions to spend a few days! We decided to compile in this post some of these activities for all of you having time to spare there and searching for the Top things to do in Joburg and its surroundings.

The Sheds@1fox are just a couple of old & historical industrial warehouses used by mining companies that were abandoned after the ’90s… or, are they!? Well, those old warehouses have been refurnished into a thriving marketplace while maintaining their original character. The Sheds are now a lively marketplace of artisanal food and produce market, surrounded by eateries and bars. When we went there, it was full of stands selling cupcakes, fresh juices, coffee, ice creams, chocolates, donuts and other desserts… it was lively and crowded with young people, mostly Afrikaners. We just loved this place, it was so hip, so unexpected! It really made us remember the Netherlands, and how much do we like the Netherlands. This is one of those places we would never know it existed unless a local told us, or we got really lucky and found by chance.

It’s located close to the confluence of the M1 and M2 highways, just off the Selby off-ramp into town, and a short distance south of the Nelson Mandela Bridge. You can get there by Gautrain or Bus (Westgate Rea Vaya bus station). It’s fully open on weekends from 10 Am to 5 Pm. We can’t imagine a better place in Joburg to grab a coffee or have a cool late weekend breakfast! 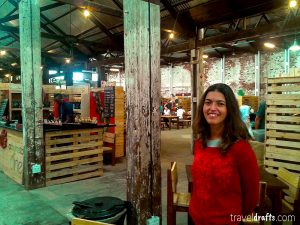 Sterkfontein Caves are part of a group of caves and excavations called “cradle of mankind” and is a World Heritage Site. The Sterkfontein caves are home to a third of early hominid fossils ever found, including the world-famous “Mrs. Ples” and “Little Foot”, an almost complete Australopithecus skeleton dating back more than 3-million years. The caves are open seven days a week and there are tours starting every thirty minutes. The adult ticket is only roughly 12/13 USD. The caves go quite deep with a few narrow and low passages, there’s even one where you have to crawl to pass. On the bottom of the cave, there’s an underground lake that no one knows how big it is because it was never fully explored. This makes the tour quite a cool and fun experience, we had never been to such big caves but really liked these.  On top of everything, you get to learn a little about archaeology and anthropology which makes this visit even more interesting. 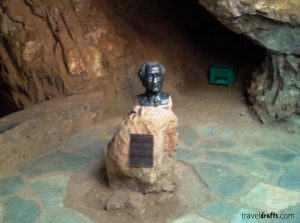 Lesedi Village is a cultural site, where you can be in touch with the history of the different South African tribes characterized by actors. The village describes the daily lives and traditions of the tribes of the Ndebele, Zulu, Basotho, Xhosa and Pedi. You can interact with the different type of villages and learn about their habitats, costumes, greetings, traditional food… You can learn a lot from the village: why Pedi tribe wear Scottish skirts…? Who was Shaka Zulu…? Why the Ndebele women wear so many clothes…? In the end, there is a big spectacle of music and the dances of the different tribes that is amazing. You can eat in the park and try local specialties, we ate crocodile and ostrich meat which were quite nice. If you want, you can spend a night in the park in one of the tribe’s houses. To see more information about the village check the Lesedi site. 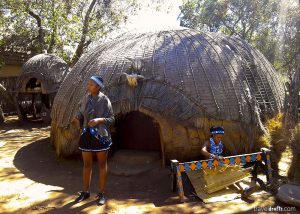 After the Lesedi Village we wanted a little bit of adrenaline, so we decided to do the amazwingzwing ziplines, which are nestled in the MaZipliningrg mountain range, close to the scenic Hartbeespoort Dam. These zip lines are made up of 7 slides and 10 platforms ranging from 2 to 14 meters in height, and you can take advantage of the amazing scenic surroundings. Although being a little pricey (30 USD per person) for the usual quite cheap South Africa, it was still worth the money because it delivered the adrenaline and fun we were looking for. The guide was funny, attentive and explained us everything very clearly! Oh, and one other thing, he did the ziplines wearing Shiny black shoes! Where else would you find a zip line guide wearing shiny black shoes? 🙂 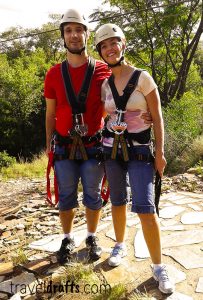 Pretoria, the Union Buildings and Gardens – After the Lesedi and the Ziplines we headed to Pretoria because we booked the night in the Sheraton, opposite to the gardens of the Union Building. We drove around Pretoria a little bit, both to get a feel of it and also trying to find our hotel, which took longer than usual :). We found Pretoria to be quite ugly, very messy and bad traffic and suburbs were very poor. It was one of the rare times that South Africa made us remember the poor side of Angola. The hotel has a great view over the gardens, a fantastic restaurant and breakfast, but it was quite old. It was our first and only time in 5 stars hotel. Despite liking it we didn’t find it breathtaking, but then again it was quite cheap for a 5 stars hotel.  We enjoyed a nice morning walk through the gardens until the Union Buildings, and around them. The Union Buildings are very imposing, 285 meters long, made of sandstone in English monumental style, and are the center and the symbol of political life in South Africa.

Finally, and before returning to Johannesburg we went to the Voortrekker Monument, this is definitely a top thing to do in Joburg! The monument is a tribute to the pioneers that came from the Cape Colony to the interior of South Africa looking for fertile land, these were the “Voortrekkers”. The monument itself is a huge granite structure located on a hilltop. It is 40 meters long, wide and high. On the lower level, there’s a cenotaph, which is an empty tomb that symbolizes the dead pioneers. You can also go to the top of the building and enjoy the beautiful view of Pretoria and surroundings. To the inside, you can look straight down to the lower room. We can’t actually figure why but the height was very unnerving. Much more than it was supposed, it’s “only” 45-50 meters. 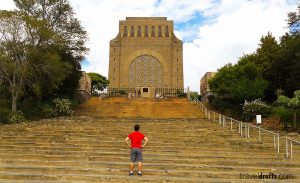 Joburg is also a place to go to those who love partying! If you want to test Johannesburg Nightlife we recommend particularly the Sandton area, with its opulent clubs, bars and wild nightlife.

All in all, despite the northern Johannesburg area not being the most touristy place in the world, we had a good time, learned about South African history and culture, had our dose of adrenaline and even went to explore caves. We definitely recommend leaving a few days to explore the area or just have a nice short holiday for expats in southern Africa.

And you? What do you think? Have you ever been to Joburg? What other cool spots did you visit?

12 thoughts on “Top things to do in the Joburg area”