In our latest trip to South Africa, we had to do a Kruger National Park Safari. We knew that a Safari in South Africa is a must do animal and wildlife experience to any adventure lover! As we went first to Johannesburg, the easiest way was through a safari tour, and have them pick-up and drop us where we wanted in Jo’burg. We have chosen a 3-day Lodge/Tent Safari tour because it was very budget friendly and it had a good mix of activities:

The pick and trip were pretty standard without any issues, although being very long… roughly 6/7 hours. When we arrived we were received with a nice cold drink and given the keys to our room. we also noticed this little fellow… a velvet monkey just in front of the door.

Sunset Game drive in the Kruger

After a half an hour we went to the sunset drive in a private reserve and got to see zebras and antelopes only after a few minutes. Though soon we got lucky, in roughly an hour we stopped in front of 5 lions, resting in the bush. It was our first encounter with a big five. The lion is really a majestic and beautiful animal in the wild. They seemed very relaxed even with our presence, after all, they are the kings of the jungle. We took our photo opportunity and while doing so, we noticed that suddenly the lions seemed on alert and turned their attention to our right. A huge elephant passed through the bush just 10 meters from us. This was clearly the best part of day 1, we were right in between the lions and the elephant. It was interesting to see the lions stressing over the presence of the Elephant. Apparently, the king has a rival… 🙂 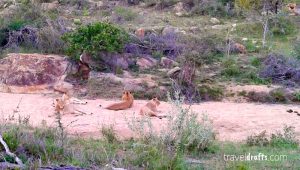 It started to grow dark so our guide took us to the bush braai. This was much more about the atmosphere and adventure than the food itself. We had a great time talking with our fellow travelers and exchanging adventures. We heard so many good things about the South African braai that we had our expectations too high about the food… After all, we were in the middle of the African Jungle…

On our way back to the lodge we couldn’t help to sing:

In the Jungle, the mighty jungle, the lion sleeps tonight

In the Jungle, the mighty jungle, the lion sleeps tonight 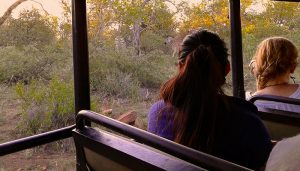 We started the day with a big breakfast at Tremisana Lodge, really early in the morning, as it would be a long day (and hopefully great). After one hour travel and thirty minutes of waiting in Orpen Gate, we finally entered Kruger National Park. We really wanted to see the big 5, but we knew that we needed to be lucky.

Our guide took us inside Kruger National Park, driving slowly and carefully and finding animals for us to see. Right in front of the gate we saw two elephants passing by, then we saw zebras, wildebeests, impalas, kudus, waterbucks… there’s always a sense of adventure and a feeling of achievement when we see a new animal. The park is huge (350 km from north to south and 80km from east to west) and the animals are wild and free to roam so you never know what you will see next. We noticed a big cloud of smoke on the horizon and wondered if it was a controlled fire. Soon after, we stopped near a small dam to see hippos, but… they were just sleeping in the water, not moving at all… they were as interesting as a rock… 🙂 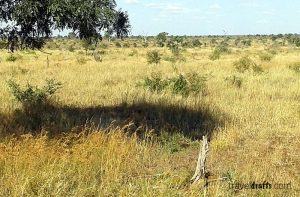 After the boring hippos, we noticed 3 cars halted in the middle of the road. We were trying to figure out why when the guide points “lions” and then also with joy: “I think they are eating… a zebra”.  We looked and saw just 30 meters from the road two lionesses eating a zebra. The lions are very well camouflaged; their color completely fades away in the vegetation.  We were there for a long time just amazed and trying to figure them out. We also noticed two other lions about 100 meters away, probably waiting for their turn on the zebra.

After this, we headed to Satara to have lunch. There were two or three fast-food restaurants, a convenience store, and a park to have a picnic. We ended up eating a weird 3 layer pizza. Yeah, I know… but we had to try one of those things.

Until now we had an enjoyable, slow-paced and very up to standard safari and expected to continue. The guide continued to tour us around the park and took us to a waterhole where huge elephant huge herd of elephants was playing with the water. There was a baby elephant throwing water with his trunk and others playing with the mud.

It looked like they were giving us a show. After a while, the guide tells us: “let’s try to get you your leopard…”

We started driving again and then turned south into a gravel road, after a few minutes we noticed we were getting closer to fire. While we continued going south we passed through a small river and saw our first and only cape buffalo stopped for a photo and continued our journey. Soon we started to smell the fire and then got to an open field where there was the fire truck. As we were becoming a little apprehensive the guide went talking with them, asking if we could continue or should head back. We couldn’t listen but they clearly signed to go ahead, so we went… and this happened:

Yes, I filmed it… and those things flying are bugs and they were much more than we can see… at one point (when I turned the phone away) it was too hot, we could barely see the road and breathing were becoming very difficult. Anyway, we did survive driving through a fire in the Kruger national park! But now we had to continue south as we couldn’t go back to the fire… Despite everything turning out well, even I don’t think anyone would want to do that again…

It was getting late, but we were still going south, already near Skukuza and we should be heading back to Satara. It was roughly 16:00 when we saw another tour looking into the woods with big binoculars. We searched until the guide pointing us a leopard on a rock… As we looked and finally found it we noticed it was looking right into us. Unfortunately, we didn’t have a camera with zoom to take a quality photo but I won’t forget this leopard (and the trouble he got us into) anytime soon.

In a few minutes we had to go, the guide told us that we had to in the gate until 18:00 or we would be in trouble. Apparently, the park closes at that time and we didn’t know it. After 15 minutes, we finally got into the tarmac and turned north into Satara. Roughly halfway through Satara, we saw a black rhino but this time we barely stopped as we were really hurrying, and then a few minutes later another rhino & another herd of elephants. Our big five in one day was complete!! But the adventure wasn’t over!

When we almost in Orpen gate, way past closing time and in almost complete darkness we saw two eyes glowing in the middle of the road, we stopped and there was a huge lion looking straight at the vehicle and walking slowly into it. The lion passed slowly just 2 or 3 meters from us, always looking straight at us, no one in vehicle dared to move, so no photos were taken… This was the last adrenaline peak of the day. Bushwalk in the Kruger National Park

Next day, it was a hangover day, but with a wake-up call at 5:00 to have a small bush walk… Outch 🙂  The walk was just one hour (thank god) and mostly about trees, bushes, animal habits, and some stories. The guide told us that there could be leopards in the area, as despite the fences the leopard can climb trees and jump very high, so they can enter and exit easily, which made us regret the decision of sleeping in a tent 🙂

Anyway, we departed to Joburg after the walk and went to Blyde canyon, which apparently is the 3rd largest in the world. It’s a great site with an amazing viewpoint, however, we would need more time to really enjoy the panorama route! 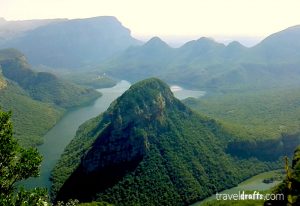 We arrived at Fourways on time and had one last adventure (this time mostly our fault!), the guy driving the van didn’t know where to drop us, and we didn’t have the address with us, neither knew where to go because we had never been there before. But In the end, somehow he managed to get us right where we were supposed to go…

This Kruger Safari was an adventure with many mishaps and turnarounds… We did manage to see the Big 5 (Elephant, Lion, Cape Buffalo, Leopard, and Rhino) and some more (Baboons, Giraffes, hippos) in only one day… and with an adrenaline bonus of passing through a fire and having to exit the Kruger National Park after (way after…) the closing time.

Here’s a complete list of things you should pack to South Africa.

If you are planning to visit the Kruger National Park we recommend you to check these amazing tours.

If you are planning to visit we definitely recommend you to check this complete guide to Kruger National Park in South Africa.

Don’t forget to make a travel insurance! You don’t want to be in trouble in Africa without insurance.