Back to Angolan Reality

It’s Saturday, 23rd of January, 10 o’clock in Swakopmund! Exactly 2 weeks after the beginning of the journey. It’s time to return… back to reality! Time for a 4 hours drive back to Windhoek and return the Volkswagen Polo, check-in and catch the return flight home to Luanda.

We know: the better the vacations, the biggest the shock when returning! But after 2 fantastic weeks, the mood was great.

The drive back to Windhoek and car return was plain normal, but things soon started to turn “interesting”:

Instead of one queue, when we arrived there were 6 or 7 cues to Luanda, each one leading to a check-in post. All the Tv monitors indicating our flight to Luanda. Weird, but OK. whatever, we just choose one.
An Air Namibia employee starts taking photos of the queues, instead of organizing them… Some of TV screens start changing from TAAG Luanda, to Air Namibia all flights, but then return to TAAG Luanda!
The same guy starts telling some people in front of us to change to the queue on the left… passes by us says nothing, and tell others to go to that also… He tells us nothing… but I look at the screen, and now it says Air Namibia again… and I go: excuse me, our queue changed to Air Namibia? Why didn’t you tell us?

The guy arrogantly tells us that he told everyone and starts discussing with us (?!) until we get upset and simply ignore him. He just assumed that because we are white we weren’t going to Angola. When questioned, instead of explaining and saying sorry he became arrogant… I understand his wrong assumption, what I don’t stand is one’s inability to assume they were wrong! – Back to reality #1

After check-in and some last-minute shop we waited for the plane… and waited… and waited…
About 5 minutes before the supposed time to departure I notice that there’s no TAAG plane…the plane hadn’t even arrived… but no one bothered to tell the costumes that there was a delay, so we waited some more until the plane appears. We boarded and departed more than one hour late, without an explanation or a word from the airline… – Back to reality #2

We were probably the only foreigners on the plane so we got very quickly through immigration. It was great, it took a minute, where at other times took almost an hour. The immigration officers even looked puzzled by two backpackers coming from Windhoek to Luanda with working visas 🙂 and kindly confirmed, where we were coming from and what we did and where we worked.
This was very quick, but then we had to wait more than 20 minutes for the bags… and when they came, they were all dusty, even stained with oil… and looking like they were smashed hard! several times! – back to reality #3

One thought was really bugging me: when we left home electricity went out. I hoped that it had returned, as usual, I really didn’t want to arrive and have the fridge full of rotten food… As I get to our apartment I check that there is electricity in the building and everything looks normal. But, then… we come in and no lights… Long story short, in Angola electricity, is prepaid and when it came back some lights and air conditioner were on, so when our prepaid balance finished everything blacked out, until our arrival. All our food was spoiled and was starting to rotten in the fridge. We needed to clean the kitchen and fridge! – back to reality #4

Prepay Electricity on a Sunday

First thing in the morning we went to pay electricity, but when we arrive… “no system” in the door! And no one from ENDE to answer the costumes – just security and many upset costumers. We asked around and confirmed that there’s no other way to pay electricity.
After 30 minutes the security guy says that a technician would arrive soon. We go get some breakfast and return, the technician was there but still no system and no one from ENDE to talk to the costumes. They even turned off the air conditioner for costumers to go away.
When someone appears and is asked if there was going to be a solution and when arrogantly replies saying that if they knew they would put on the door… Complete lack of respect for the customer – back to reality #5 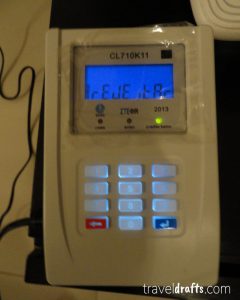 Eventually in the afternoon a “better technician” appeared, sorted out the problem and we bought electricity and solve our problem!

Returning from vacations sometimes is very hard, but this back to reality was a complete slap in the face!! Anyway WORTH IT, These were great vacations! In the next posts, we will share with you everything about them and inspire you to visit Namibia, Botswana and Vic Falls…

1 thought on “Back to Angolan Reality”